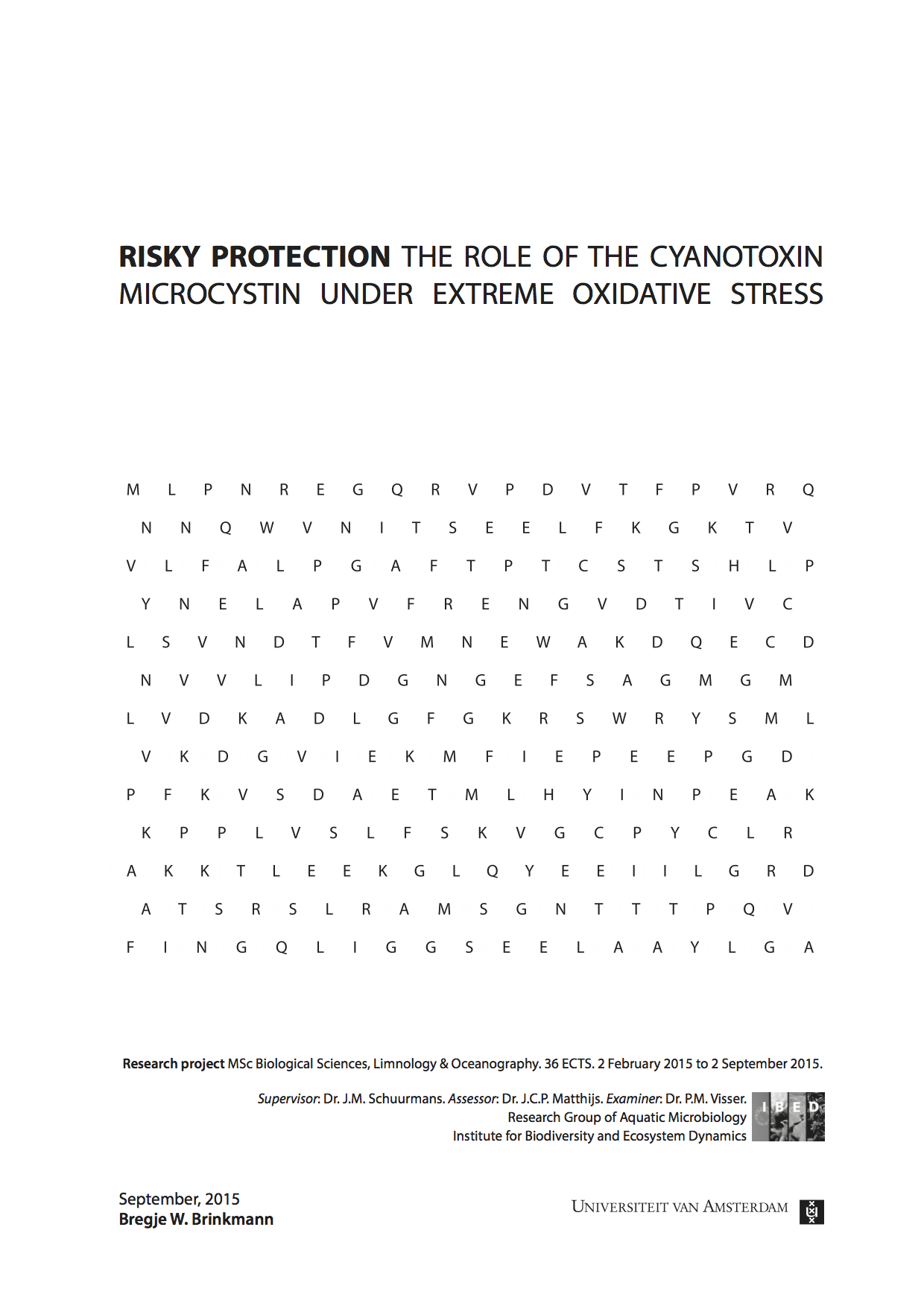 Toxins produced by bloom-forming cyanobacteria pose a worldwide threat to stagnant and eutrophic lakes and water reservoirs. Recently, the in-lake addition of hydrogen peroxide (H2O2) proved to be a quick and selective way to eliminate both bloom-forming cyanobacteria and their toxins from affected water bodies. Yet, the cyanotoxin microcystin was found to stabilize redox-sensitive proteins of producing cyanobacteria during oxidative stress by binding them covalently. Experimental support for this protective modification – recently termed microcystinylation – pointed towards the risk of selecting for toxic cyanobacteria by the addition of H2O2. Driven by this concern, the present study aimed to decipher the role of microcystins in modulating the response of cyanobacteria to elevated oxidative stress. To this end, the performance of microcystin-producing wild type and microcystin-deficient ΔmcyB M. aeruginosa PCC 7806 was monitored over time subsequent to the addition of 10 mg·L-1 H2O2. Western blotting indicated that microcystins were covalently bound to RuBisCO and parts of photosystem II under ambient conditions. Eighteen additional potential binding partners, relating to metabolic processes, detoxification and repair, were inferred using a LC-MS/MS approach. Despite a 2-fold increase in the proportion microcystinylated wild type proteins during the first 24 hours of the response to H2O2, synchronized with a temporal and complete loss of non-bound microcystins, only the ΔmcyB mutant was able to recover from the stress. With 11.7% overall transcriptional change at two hours after the addition of H2O2 (1.4 < log2 < -1.4 and p<0.001), wild type transcriptional changes exceeded that of the mutant more than three-fold. Damage to RNA integrity was exclusively observed for the wild type. Whereas the mutant decomposed the surplus of H2O2 within two hours, wild type cultures still comprised 2 mg·L-1 H2O2 after two days. Microarray analyses explained this contrasting peroxidase activity by the enhanced transcription of the peroxidase encoding gene IPF5431 (t2prx) in the mutant. The addition of catalase three hours post-peroxide addition could complement for the lack of constitutively expressed t2prx in the wild type, resembling the recovery of the mutant. Microarray data further revealed that the microcystin synthetase (mcy) gene cluster was downregulated by the addition of H2O2. Most prominent microcystin-dependent transcriptional differences in the absence of the addition of H2O2 related to photosynthesis, where the ΔmcyB mutant showed a light-limited transcription profile compared to the wild type. Overall, this research project demonstrates that the production of microcystins comes with considerable costs. Moreover, it alarmingly illustrates the minor change in gene expression that is required to increase the cyanobacterial resistance to H2O2.